This week Microsoft has indeed announced on his blog that the last test build of Windows 10 21H1 stamped 19043.928 was probably the final version. Even if adjustments can still be made via small fixes, this latest version is representative of the one that will be released to the general public later. Microsoft has therefore launched the last phase by opening the “Release Preview” channel, now translated into French as “preview channel”, the most stable of the test channels, which allows everyone to install it.

Those who have already subscribed to this test channel receive the monthly updates a little in advance and will gradually receive the new Windows 10. Those who are impatient can now manually check for updates via Windows Update for the install.

On the side of novelties, however, we should not expect a big upheaval. There may be some cosmetic icon updates, but also features, such as the ability to use multiple Windows Hello compatible cameras. Some parameter pages may have been enriched or modified.

New features to discover by modifying a parameter

Those who are not registered to this channel and want to give it a try can do so by activating a setting in the settings. Be careful, however, during this period of confinement and telecommuting, it is better not to try the experiment if you do not have a good command of the computer tool or if you do not have another backup computer. As with any update, bugs with certain configurations could be discovered.

The manipulation is to open Windows 10 settings under “Update & Security” in the “Windows Insider Program” section. Clicking on the “Start” button triggers a wizard. When choosing the channel, it is the one called “Preview channel” which opens access to the installation of the latest Windows 10 21H1. 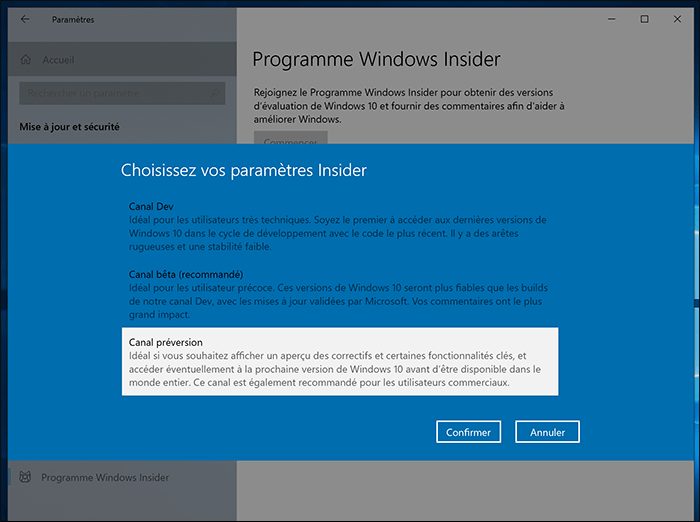 A restart is then necessary to confirm participation. A simple search in Windows Update will trigger the update to Windows 10 21H1 to discover, for example, a new Cortana application, improvements to the Notepad software and in Windows search or even changes made in various sections of the system.

Note that it is also possible to choose to install a blank version of this Windows by recovering the ISO files on the dedicated page. This is also reserved for users who have voluntarily signed up for the Windows Insider program.