Article updated on 04/29 – During an interview with the regional press, Emmanuel Macron gave new information on the health pass which will be generalized in France by June. While it was originally intended for travel, we now learn that this pass will indeed be necessary to participate in certain activities in France in places with a lot of people. More information below. We also invite you to read our guide dedicated to certificates to learn more about the schedule for reopening businesses and stopping the curfew outlined this Thursday, April 29 by the President of the Republic.

Europe wanted it, France was the first country to do so. A “Health pass” is actually and test to “streamline” travel on the old continent. Integrated into the TousAntiCovid application (function called “Carnet”) in digital version but also available in the form of a paper document, this device will be generalized on the continent by mid-June according to the European Commissioner in charge of vaccines Thierry Breton.

Tousanticovid is the application set up by the French government during the coronavirus pandemic. It provides information on the situation, makes it possible to create travel certificates, and, above all, to identify contact cases.

If it will only concern travel at first, its use will extend to other areas as indicated by President Emmanuel Macron this Thursday, April 29. However, this type of device has been the subject of debate for months and raises many questions, both practical, ethical and technological. Here is what we know to date and what to know about this famous health pass that you will have to use this summer to go on vacation or to access certain events bringing together the public. Note that this article will be updated regularly according to the news.

What is this Health Pass?

This is a digital or paper device that certifies and gives faster access to the results of your PCR tests, antigens, a certificate of vaccination against Covid 19 or a certificate of cure. From this summer, it will make it possible to streamline checks at airports, in accordance with the wishes of the European Commission.

Initially, it had been envisaged by the government for other uses, in particular to provide access to certain places such as bars, restaurants, museums, cinemas, leisure centers, etc. A solution which should allow “to live again normally” despite the circulation of the virus according to Gabriel Attal, spokesperson for the government. The Minister of Solidarity and Health Olivier Véran had then indicated wanting to do without it to reopen these establishments, relying instead on vaccination coverage.

If the health pass should not be used to condition access to bars, restaurants, cinemas and other places “of everyday life”, Emmanuel Macron has however confirmed during an interview to the regional press thatfrom June 9 next, the health pass will be necessary to access certain major cultural and sporting events bringing together many people, in “stadiums, festivals, fairs or exhibitions” especially. Whatever happens, attendance at these places will be limited to a maximum of 5,000 people. From June 30, the use of the health pass will be extended to all events bringing together more than 1,000 people.

What form does the health pass take?

After each PCR test, antigen or after your vaccination, you can upload your certified result or your vaccination certificate on the platform sidep.gouv.fr. The novelty of these documents is that they now present a QR code (or Data Matrix to be precise) allowing their authenticity to be verified, and it is the latter that the police or authorized personnel can already scanner in airports, using a dedicated application.

Several options are available to you: you can print the received PDF file, or import it into TousAntiCovid. Note that people who are less comfortable with digital technology can always request their test results or their vaccination certificate from the healthcare professional who took care of them. The latter will print the document for them. It will then act as a health pass. 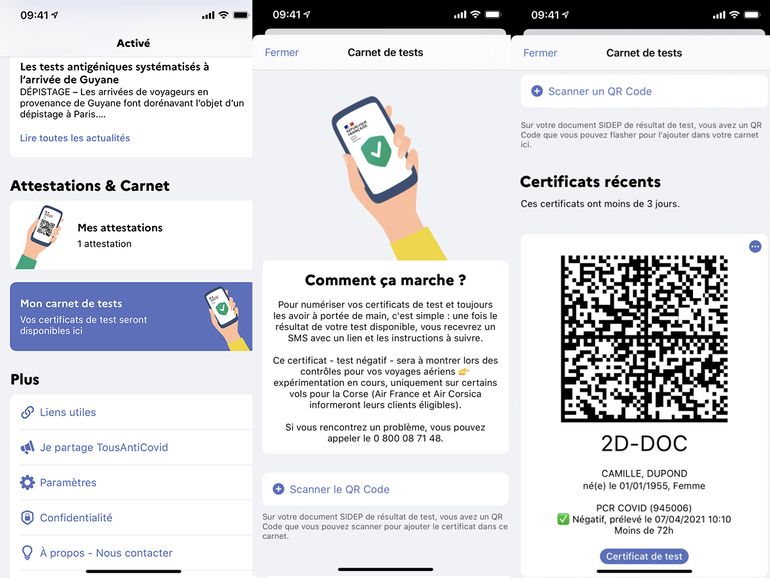 In the TousAntiCovid application, the health pass takes the form of a new function called “Carnet” which centralizes all your documents. As said above, it is about importing the documents of your choice: results of PCR test, antigen test or vaccination certificate from April 29. If you have a paper document, you can use your phone’s camera to scan the QR Code and integrate it into TousAntiCovid.

Is the health pass secure?

Dematerialized, the device obviously raises the question of data protection, especially when it comes to sensitive medical and personal data. According to the government, the data is encrypted and remains local on users’ phones. The latter also ensures that the application to scan the codes does not keep anything in memory. Thanks to the use of these QR codes, the authorities or authorized personnel only have access to the information that is useful to them. However, whether encrypted or not, it should be remembered that before being added to TousAntiCovid, the test results and other certificates are no matter what happens centralized on the sidep.gouv.fr platform and however secure it may be, no computer system is infallible.

Will it be compulsory?

The pass in digital version will never be mandatory according to Thierry Breton, nevertheless its paper version should eventually become so since most European countries require PCR test results to enter their territory (this is the case of France), the information has been confirmed to us by the government during the press point organized for the presentation of TousAntiCovid Carnet. Be careful, however: in the few European countries that do not use PCR tests to govern access to their territory, travelers who decide not to use the health pass could be subject to more restrictive measures, such as quarantines.

In addition, from June 9, 2021, a digital or paper PCR test or vaccination certificate will be required to access events bringing together many people in France. That being said, as Emmanuel Macron indicated, the health pass cannot condition access to places of “everyday life” such as restaurants, supermarkets, cafes or cinemas.

And for trips outside Europe?

The device is currently being tested on certain flights to Corsica and will soon be extended to flights to overseas departments and territories, then in June to travel to or from other European countries. But it may well be that in the long term, the device will extend to travel to or from other continents. This is what the French government wants anyway, but it will certainly take longer.

No date or horizon has been announced yet. Thus, if you plan to travel outside the European Union this summer (subject to this being authorized again, of course), you will need to find out about the rules in force in the country where you will be going.

Do other countries use similar systems?

Some countries have even launched more comprehensive health passes governing access to certain places. This is the case in Israel in particular, where more than 50% of the population has already been vaccinated, who launched a “green passport” allowing access to restaurants or cultural places for example. Here are pictures of this famous sesame: 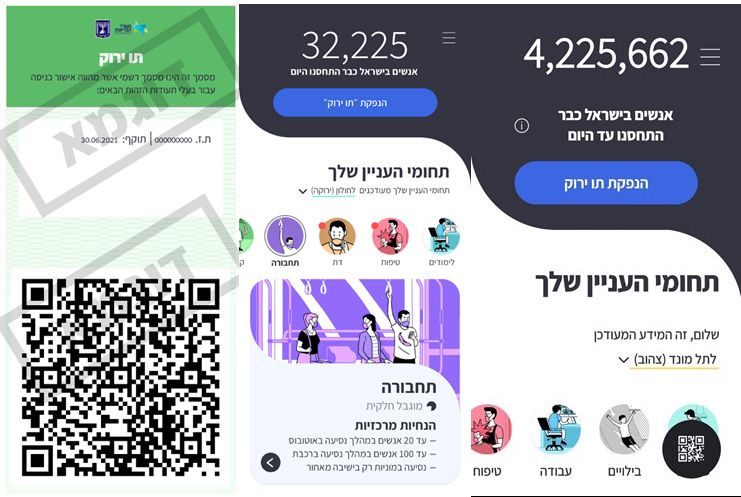 on the left, the paper version of the pass, in the center and on the right, the Israeli government’s Traffic Light (‘Ramzor’) app – Image credit: corona.health.gov.il

Other countries have also launched similar initiatives, such as Iceland where they issue “vaccination certificates” or in Denmark with “Passports corona”. New York City in the United States has also launched its own version of the health pass, called the “Excelsior pass” and available in paper or via an app. It is therefore indeed a system which is tending to become general.