Manufacturers of robotic vacuum cleaners are developing their products to offer ever more new possibilities to users and go even further than what our classic vacuum cleaners offer or hand. The navigation systems are now perfected and it is the turn of the mop function and little extras at the suction level to benefit from the developments.

Ecovacs notably offers two original functions in its latest T9 model or its version with T9 + emptying station. These models are equipped with an air freshener with scent capsule but also an oscillating mop to improve the cleaning of tiles and other non-textile surfaces. After the discovery of this model we now share the results of our tests.

The package is made up like Russian dolls with two other containers placed next to the item that takes up the most space, the automatic emptying station. Note that this element is optional, we also find the Deebot T9 + sold alone, in this case it takes the name Deebot T9, without the “+”.

In another container are the accessories supplied by Ecovacs: 2 dust bags for the emptying station, the two side brushes to be fixed under the robot, the mop holder, ten disposable “mops” which will be attached to it. and a fragrance capsule for “air freshener” functionality. 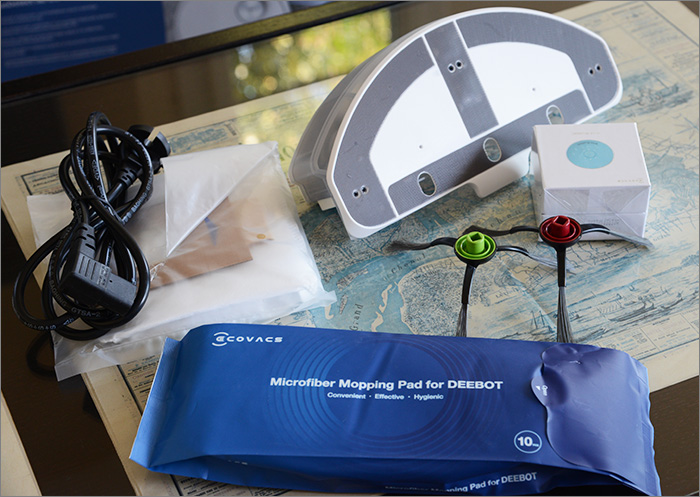 Finally, we find the main interested in the last box, almost ready to be used once its side brushes installed. We can distinguish the TrueDetect 3D sensors on the sides and the protrusion of the TrueMapping distance sensor at the top. 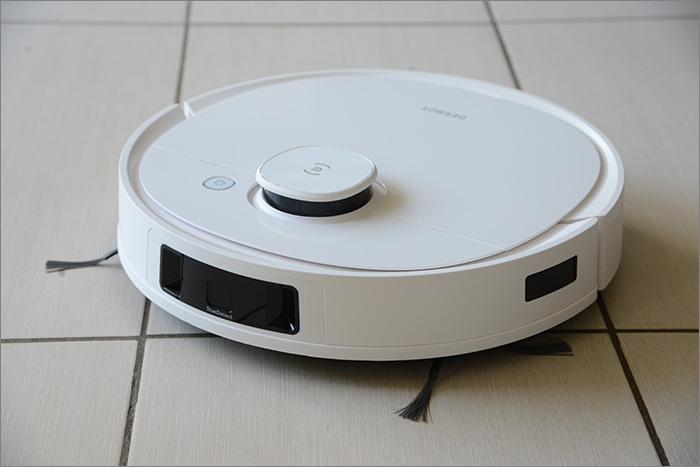 Under the robot we see the removable main brush which requires regular maintenance but not systematic, once a week according to the manual but this will also greatly depend on the frequency of cleaning and the clogging of the surfaces. 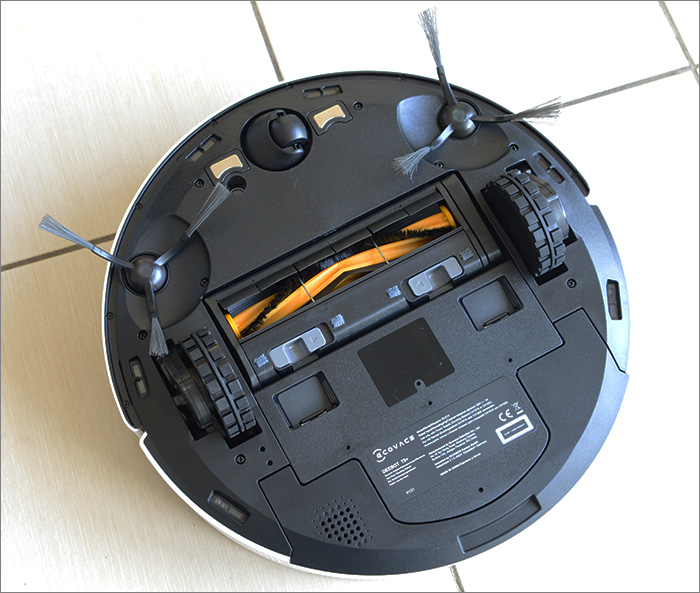 On the hood of the vacuum cleaner the power button to be activated during the first start-up is clearly visible, next to the button to reset the WiFi during installation. 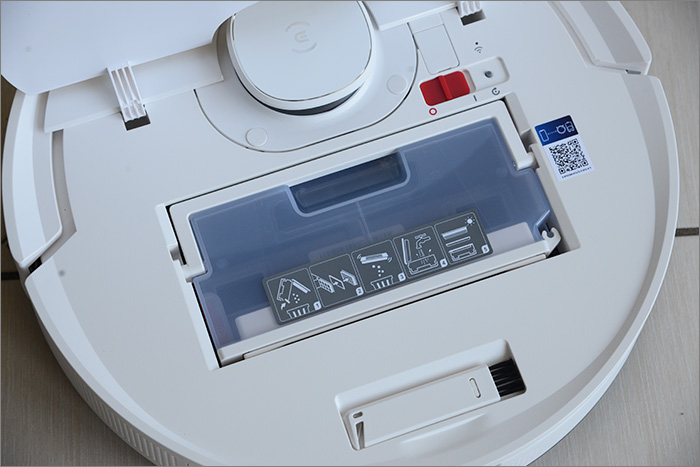 There is also a small accessory wire cutter and brush to clean the filter of the dust container. Even with a dump station it will be necessary to remember to clean it once a week according to the manufacturer’s recommendations. 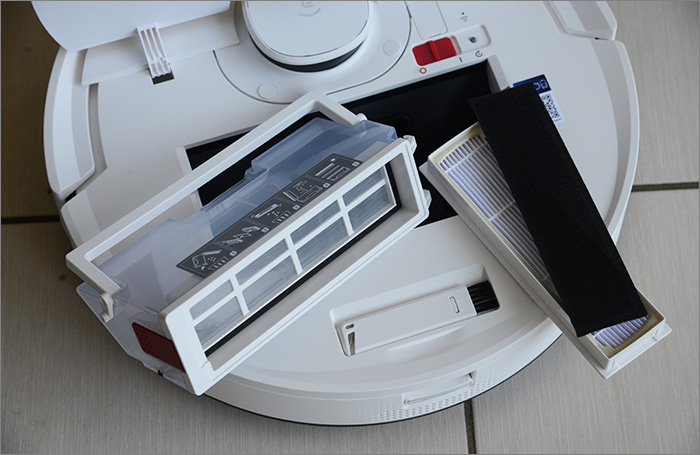 We would have liked to immediately try spot cleaning with the mop to test this oscillation function as we had done with the Roborock S7 but the Deebot T9 does not have a physical button for this functionality. We therefore resign ourselves to going immediately to the installation via the application which is therefore essential, even if it is always possible to launch a blind cleaning with the physical start button.

Installation of the application

The Ecovacs app is available for Android and iOS. Adding a robot is very simple by scanning the QR code located under the hood of the robot vacuum. We are then guided to connect the robot to Wifi and update its firmware. You can also change the language in the settings to make it “speak” in French. 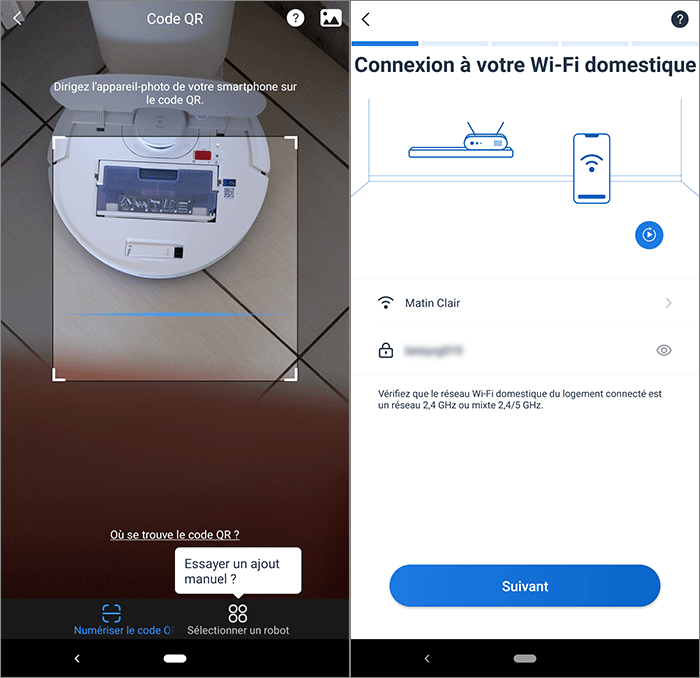 The robot expresses itself during the cleaning phases when starting up or returning to the station, for example. After installation we are ready to start the first cleaning. An important phase because the robot will begin to map the accessible rooms of the house, it is therefore recommended to leave the doors open to let it circulate and clear objects that could interfere with it. 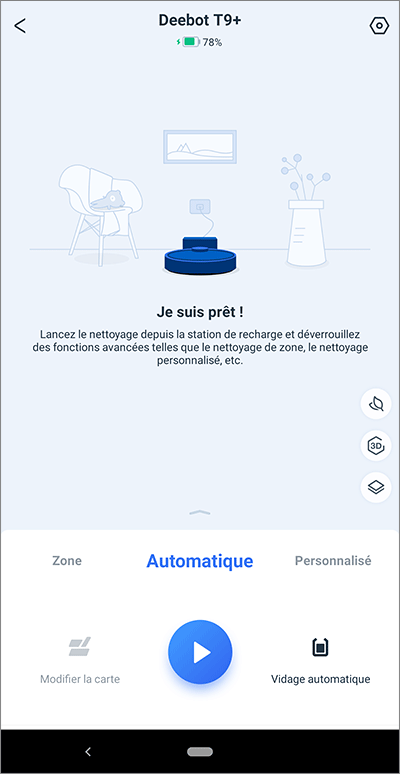 At this stage we do not know more about the performance of the Deebot T9 + but its start-up suggests promising features such as the air cleaning function or the oscillating mop. But let’s do a first pass first and map the room.

He takes his time when discovering the home but after spending long minutes exploring everything, hesitating during the first passages, he delivers a completely satisfactory menu with colorful pieces. It is possible to manually modify this map in order to put pieces together in one, or to separate zones in two. This will be useful when asked to clean by zone, choosing to give him the order to clean only one or more rooms during a session. 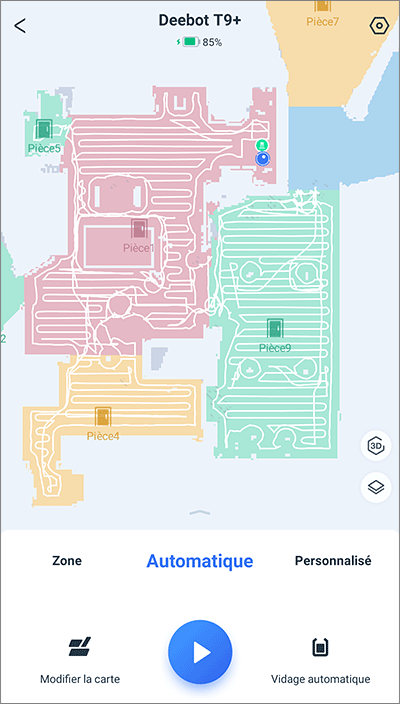 In any case, it showed a very responsive navigation in the face of obstacles but also very smooth without violently hitting objects and furniture. It recognizes rugs and carpets without any problem and in this case triggers a stronger suction instantly. 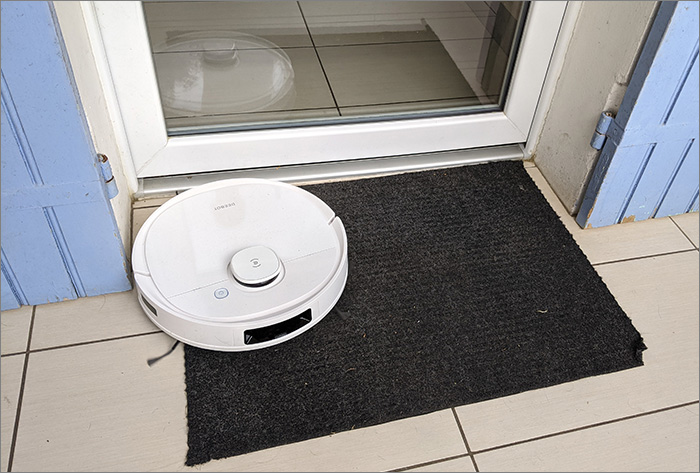 Only the corners and some borders may retain some traces, but this remains anecdotal because our Deebot T9 / T9 + is very agile and manages to pass without almost touching the edges between the chair legs. 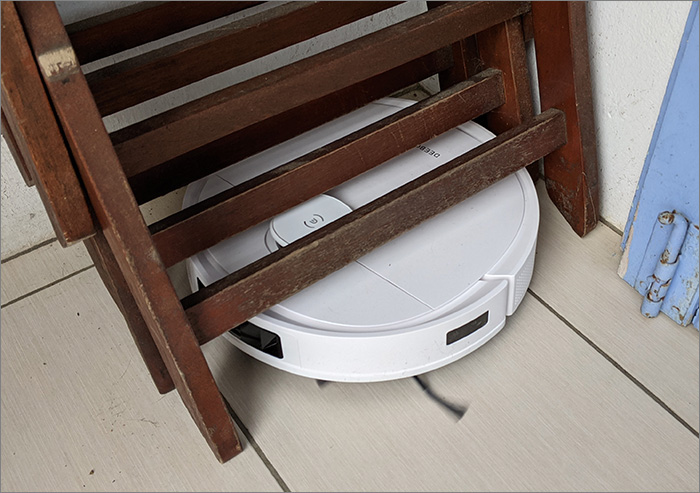 Better still, he did not let himself be fooled by any of the traps usually blocking in our house, and on which the other models are breaking their teeth. He was perfectly able to detect the presence of a staircase and his traction system even managed to get out of this small gap created by the tiling.

The bay window rail on which the other models are breaking the teeth just slowed it down for a few seconds, the time to find the right angle of passage.

He therefore passed all the difficulties without flinching, especially the staircase which was not very high. It will be better later to configure a virtual barrier to avoid damaging the robot or even injuring someone in the event of a fall. To do this, you just have to edit the map. It is possible to choose between zones or virtual barriers. For each of them, we select total avoidance or switch to suction mode only (it will avoid the area in mop mode). 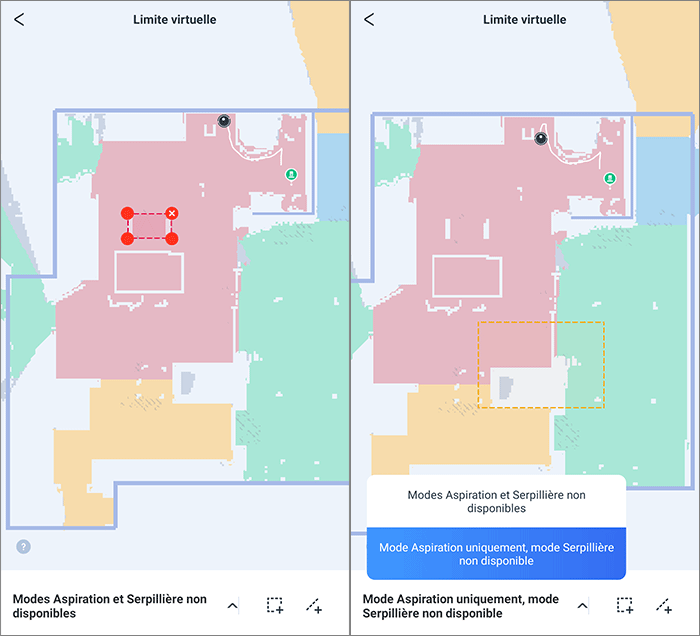 Finally, getting back to basics was not a problem either. The approach phase is slower and slower. After a short time the emptying is triggered with a deafening noise (to be avoided at night therefore), it fortunately lasts only 20 seconds.

It will probably be more effective in rooms with small volumes because we can feel a diffusion of a perfume, quite pleasant and fresh when the device passes nearby, but it remains really very light. The delivered capsule is supposed to last 60 days (after 70m² of cleaning, the app indicates that there is 97% of reserve), but this accessory cannot be found on the internet for the moment, the T9 / T9 + models being very recent. 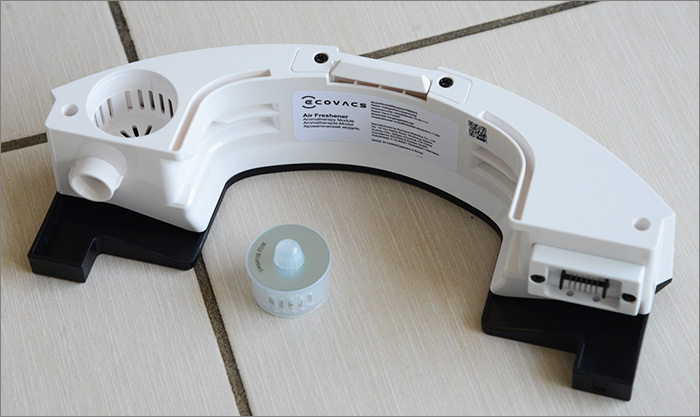 The mop is used with the additional tank that takes the place of the sanitizer, so you cannot use both at the same time. We place one of the disposable mops retained by a scratch system after filling the water tank. 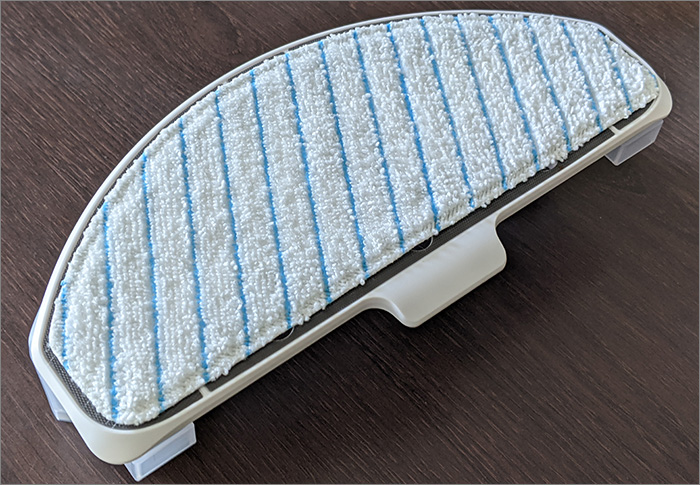 Installation is extremely simple and the device immediately detects that it needs to be washed. It sucks at the same time, although for this to be optimal, it would be necessary to make a first sucking pass. You can clearly see the oscillation of the mop.

For the test we did not give him a gift with animal hair and significant traces. The oscillation plays its role well and the results are far from those seen with a fixed mop that we find in most competitors. It manages to remove most of the dirt, even if it still stumbles on the marks on the most stubborn which would require 3 or 4 passes.

As with the deodorant capsule, the T9 / T9 + disposable mops are not available for sale on the internet. On the other hand, we would have liked to know if it was possible to have washable mops. With the help of Ecovacs support in France, reached via the number displayed on the official website, and who were very concerned and pleasant, we learn that the T9 only accepts disposable mops. We were also unable to know if capsules with different scents would be made available.

On the other hand, while waiting for the accessories to arrive in the online stores, it is possible to place an order for the original accessories through this same after-sales service. If we can be patient in terms of accessories, it is a disappointment for the option of washable mop that is not possible to consider. Disposable mops are very practical but rather thin and it is very likely that a little thicker disposable cloth would have further improved the cleaning efficiency.

NB: putting a disposable mop through the machine has shown that it is possible to reuse them several times, even if they risk losing effectiveness over time.

On the other hand the Deebot T9 or T9 + does not offer a “double pass”, again this would have made it possible to moisten the task before eliminating it. But, again, the results are pretty good compared to the fixed mop models.

The only one to be able to hold on to this model is the Roborock S7 which has a washable mop and a sonic vibration mop function. It even does a little better in intensive mode thanks to its double passage precisely and also has the advantage of having a mop that lifts automatically when passing rugs and carpets. If it is rather the suction part with emptying station that appeals to you, the alternative will come from the same brand with the Deebot N8 + model whose mop function is anecdotal, but the price is much more accessible.

The Deebot T9 and T9 + are identical in terms of the robot itself, the model sold as T9 + at € 899, i.e. € 200 more expensive, incorporates the dump station by default. Note that it is also possible to buy it on its own after the fact for € 299, so you might as well decide immediately.

Admittedly this model is therefore negotiated a little expensive, at 699 € without automatic drain, but it offers features that few models offer such as the air freshener, even if the fragrance is a little too discreet for our taste. On the other hand the mop is effective and will delight all tiled floors. For hybrid floors, handling will be a little more delicate since it will first have to be vacuumed alone, and then switch to mop mode, excluding the textile areas via the application.

Its biggest strength, on which it beats its competitors flatly, is in terms of navigation and a movement and detection system that has proven to be infallible. Agile, he was able to vacuum efficiently by avoiding traps and without forgetting the contours of table and chair legs. Associated with its emptying station, it is the guarantee of hardly ever having to vacuum manually, and without intervening too often at the level of maintenance of the device.