Windows 10 is a constantly evolving operating system and a new version will soon be available to users. It is even already possible to test the arrival of a few timid new features announced. This is the opportunity to take stock of the evolution of these versions.

There are now 1.3 billion active devices running Windows 10, Microsoft announced, but not all users use the exact same system. The publisher indeed offers major updates twice a year but leaves the choice to trigger the update or not, under certain conditions. Only the oldest versions reaching the end of support are automatically updated to a newer version.

According to the latest statistics offered by Adduplex we see that Windows 10 1909, a version of the fall of 2019, is now largely in the minority for this reason. This is the latest, Windows 10 20H2, which benefits from the automatic switch to a newer version while the first version of 2020, stamped 2004, retains roughly the same number of users as last march. 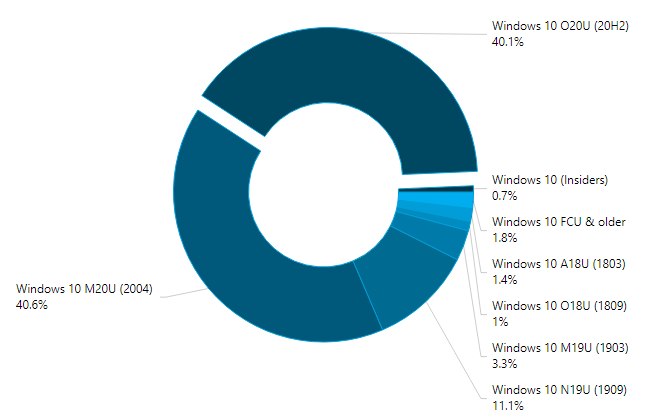 This month Microsoft will bring the first version of Windows 10 of the year to the general public. It will make only a few changes and will keep an identical core system, so the installation will be quick. In all cases, it is the users who will decide to take the plunge by triggering or not the installation themselves via the update parameters.