Update of May 11, 2021. After the first conclusive speed tests carried out at the beginning of the year, new measurements were put online on a more efficient fiber connection and Surfshark did rather well. We’ve updated the metrics and our VPN review to reflect these results.

Surfshark is the most economical virtual private network (VPN) service on long-term subscriptions. This competitiveness does not prevent it from posting very high speeds, especially on servers abroad, from being compatible on many platforms, and from not limiting the number of simultaneous connections.

It also offers additional options such as an ad blocker, trackers, and malware, or the possibility of choosing the applications or sites filtered by the VPN.

The interface of Surfshark could not be more refined, whether it is on Windows 10 or on Android where we use it. The application is in French and no manipulation or knowledge of VPNs is necessary before being able to choose a country from which to connect.

The user has the choice: he can dive into an alphabetical list of the different locations to connect to, and he can simply ask to connect to the “nearest country” or to the “fastest server” depending on his preferences. needs. If he decides to scroll down, he will discover the 65 countries where he can connect. If Surfshark offers several different connection points in the same country, it details the cities and attaches a small flag to find your way around. To the right of each location, a small star allows you to create favorites. 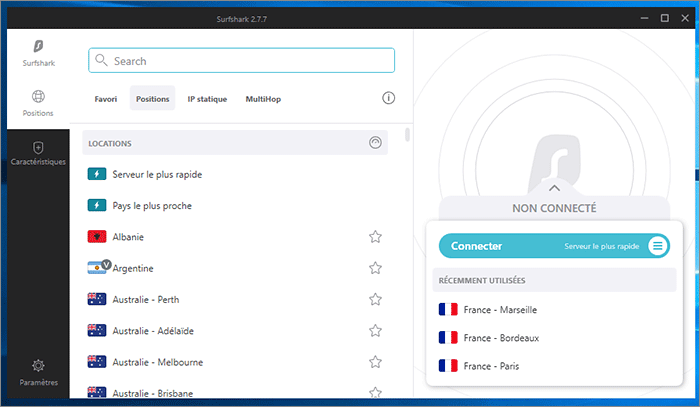 At the top of his screen, the user can decide if he wants to connect in Static IP or in multi-hop, that is to say, go through two locations rather than one, in order to add a layer of confidentiality. Multi-hop VPNs can be particularly useful in preventing your information from being identified if a security breach occurs in one of the VPN’s data centers.

For the rest of the interface, on the right, the user can know at one glance whether he is connected or not, has access to his IP address under VPN, a kill switch button, and the amount of data transferred. On the left of his screen, he can also access additional functions. 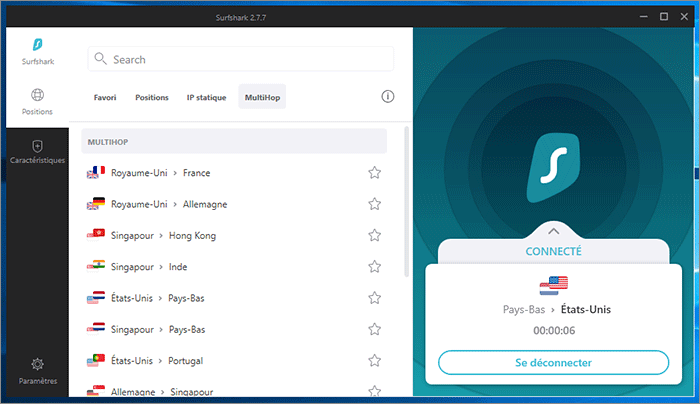 The mobile application has strictly the same architecture, except that it is built on four very clear tabs: the first, entitled Surfshark, opens on the big button to quickly connect to the last country where we connected. The second, “positions” allows you to choose a specific location in the alphabetical list. In the characteristics tab, there are additional features. Finally, in settings, it is possible to replace the GPS position of the device with that of the server where you connect. The user can also make their device invisible to others at the point where they are connected. 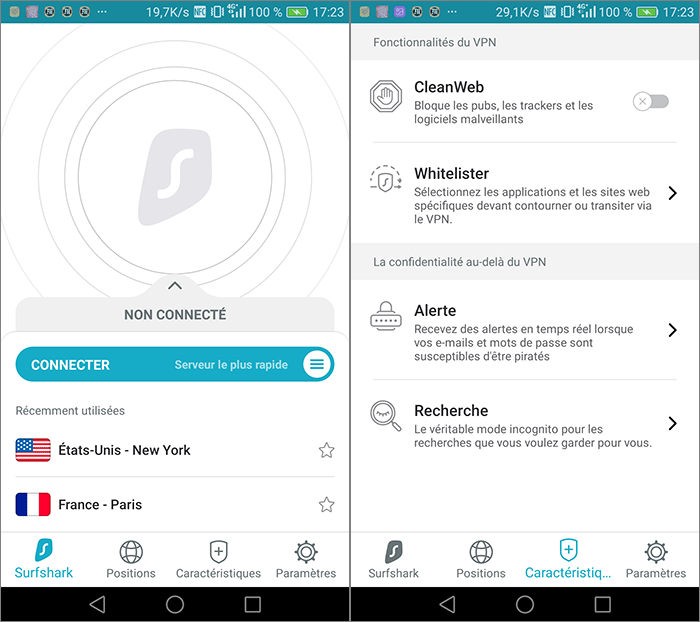 The speed of the connection when connected to a VPN, regardless of the use you have of it, is a crucial element. Rather than going through your ISP’s only server, the VPN will make you take a detour through a third-party server. Here is the impact this detour will have on your connection with Surfshark.

Our test was carried out on a fiber connection in Paris. The basic connection displays a ping of 9 ms (milliseconds) for a downlink speed of 910 Mb / s, and an upstream speed of 757 Mb / s. On a connection via Surfshark to a Parisian server, there is a significant drop of 259 Mb / s going down, and a more negligible decrease going up, for a ping of 15 ms. The connection, therefore, remains of very good quality, even for the most demanding uses.

In order to access the catalogs of streaming platforms abroad, it may be interesting to connect to a server in the United States for example. We obtain 90 ms of ping, 186.71 of descending rate, and 55.22 of ascending rate. Be careful, after testing, Amazon Prime Video immediately detects the VPN and prevents access to its catalog outside France, where Netflix lets it flow.

Note also that in static Ip, one of the features offered by Surshark, the throughput drops considerably. During our test, still, on a server in New York, we arrive at these results: 89 ms of ping, 68.87 Mbps downstream and 32.75 Mbps upstream.

Finally, via multi-hop (connection via a first third-party server, then a second) in the United Kingdom, then in France, the ping of 38 ms remains correct, as well as the flow of 98 Mb / s downstream, and 56.32 ascending

We appreciate that Surfshark is headquartered in the British Virgin Islands, which is generally considered a privacy-friendly country due to the lack of surveillance sharing agreements with other countries. Despite being a territory of the United Kingdom, the British Virgin Islands has jurisdiction separate from the United Kingdom, without data retention laws, and whose High Court has historically opposed requests for extra-national business cases.

While it’s virtually impossible to verify whether a VPN keeps logs of usage data, Surfshark’s privacy policy says it goes beyond normal VPN practices, by not keeping any connection logs that allow you to identify the location and allowing to deny diagnostic error reports enabled by default. But we would have liked this policy to be a little more detailed.

AES-256-GCM encryption supports persistent privacy, which means that the encryption keys are changed periodically to protect security. The VPN also has a kill switch that prevents network data from leaking out of their secure tunnel if the VPN connection fails. Additionally, Surfshark plugins for Chrome and Firefox have been independently audited by Cure 53.

No IP address, DNS, or other potentially identifiable data leaks were detected during our testing. We also didn’t find any leaks on WebRTC, which are common among VPNs. Even if you don’t need it, it’s worth noting that Surfshark offers a specific browser plug-in to prevent further WebRTC leaks.

Surfshark is the cheapest VPN of our selection (if you subscribe for two years) and offers all the features one expects from a VPN while remaining very easy to use. The Windows and Android applications, although a bit austere, are very clear and easy to use.

In addition to its accessibility, Surfshark offers itself the luxury of offering a few additional features: the classic add-ons on Mozilla and Chrome, but also an ad and malware blocker, as well as the ability to “whitelist” applications, such as that, is to say to bypass or not the VPN.

If you are concerned about DNS privacy on mobiles, Surfshark also offers a dedicated “Trust DNS” application through Google Play. Simply put, it forwards requests for information from websites to your browser and sends them to Surfshark instead of your ISP.

Likewise, on mobile, the application proposes to replace the GPS position of the device with that of the server where we connect, and where we can make our device invisible to others at the place where we are. connect.

Surfshark accepts payments by credit card, PayPal, Google Pay, Amazon Pay, cryptocurrencies, direct debit, or Sofort. The site offers 24/7 online support, as well as a considerable amount of help articles and tutorials. We regret having to pay more to protect your emails, another feature that Surfshark offers, but given the price, it’s hard to blame it.