After Traffic, the two opus ofAnt-Man and The labyrinth, let’s continue to scan the TV program with Justice League. The feature film DC Films is scheduled for Thursday April 29 at 9:15 p.m. on the TMC channel.

Like many superheroic productions, the film held promise on paper. It must be said that it brings together some of DC’s most emblematic vigilantes, spectacular as possible, and very popular with the general public.

In addition, the studio is not known for skimping on means (this is not a guarantee of quality, of course) and above all has already shown itself with great success.

Even though they had flaws, Man of Steel or Batman v Superman had at least had the merit of convincing visually. Without being exceptional, the scenarios also held up. The excellent trilogy The Dark Knight by Christopher Nolan is obviously standout.

Unfortunately, sometimes appearances are deceptive and blockbusters disappoint, despite enticing trailers. Is this the case of Justice League ? Let’s see this together.

The synopsis of Justice League

Superman is dead, it is now Batman, among others, that bears the heavy responsibility of protecting humanity. But the Batman, even though he is incredibly strong, does not have the powers of his late pal.

When he realizes that an alien invasion is looming, he decides to enlist the help of his peers. His idea ? Build a team of superheroes to face this unprecedented threat.

With Wonder Woman, Aquaman, Flash and Cyborg, Bruce Wayne will do everything to avoid the worst, but it’s far from won. The enemies are numerous, unpredictable and ready to do anything to achieve their ends.

Should we watch Justice League Thursday on TMC?

Justice League has been talked about a lot, not necessarily for the right reasons. Long before its release, it was already running ink, the fault of a more than chaotic production.

The feature film has long been a project, the kind we talk about every year, without ever really materializing. But, surprise in 2014, DC is finally speeding things up and officially announcing Justice League.

Zach Snyder is chosen to direct it, completes filming, but ultimately decides to retire after being struck by a family drama. Joss Whedon then inherits the “hot potato”, manages the post-production and tries to affix his paw to the feature film.

As a result, many scenes shot by Snyder are cut and the film is unrecognizable. As saying that Justice League therefore was not really starting off on the best possible basis.

Before starting to watch it, however, we were quite optimistic (naive?). For DC, it was the opportunity to take a new step, to show once again that the studio does not have much to envy to the blockbusters of its rivals.

Wonder Woman, Batman v Superman and Man of Steel had already been rather nice surprises. Why not Justice League ? Because he’s just not up to par. Already, his script is simplistic and not helped by a steep cut that never allows the story to take off.

The beginning of the film is symptomatic of this evil. Batman and Wonder Woman aside, the other heroes are relatively “anonymous”. Obviously, lovers of comics know them and they all vaguely evoke something to the general public. 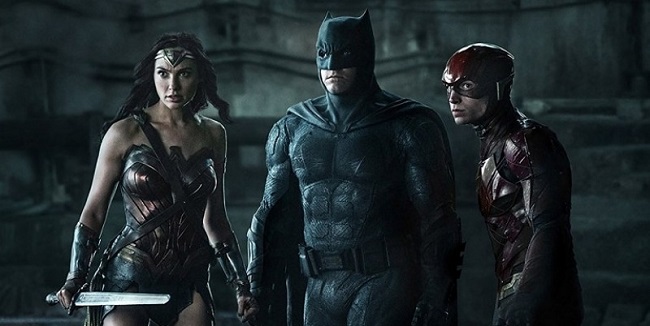 But they’ve never really been featured in the DC Cinematic Universe. More contextualization would therefore probably not have hurt, if only to give a soul to this super-heroic team. The whole movie relies on them, that would have been the least of it.

As a result, the film suffers from the outset and it cannot even count on a rich universe or an abundant mythology to compensate. Everything is not to be thrown away, certain characters sometimes do well (Aquaman in particular) and the actors are generally doing a good job. But there is nothing to be ecstatic about either.

It’s also difficult to make a good feature film without a charismatic and interesting villain. Here, Steppenwolf and the parademons unfortunately don’t tick the right boxes either. They are naughty, very naughty, but sorely lacking in stature. Their inclinations are (too) basic and Steppenwolf would have deserved to be better developed.

In fact, Justice League lack of coherence and overall harmony. Besides being confusing, the writing lacks ambition and the few successful sequences fail to eclipse this evil.

To make matters worse, the film takes the wrong tone. After very dark productions, he plays the card of lightness. It can be understood, Marvel is customary and manages to vary the registers. Ant-man and Guardians of the Galaxy are the proof.

Unfortunately for DC, it doesn’t work here, just because it’s not funny and even quite incongruous. The blockbusters of the competition are not always so either, far from it. But with them, the process is still better controlled.

You will undoubtedly have understood it by reading this opinion, Justice League is not a complete success and we therefore do not recommend that you watch it tonight. On another channel or streaming, there are undoubtedly better choices.

Let us not forget either that the “Snyder Cut“, the original version of the feature film by Zach Snyder, was also released this year. It is possible to get the film (it lasts 4 hours anyway) on VoD and it is not excluded that you like it more than the one broadcast on TMC.

What to watch in streaming?

Sure Netflix, there is no shortage of good choices. Between the trilogy Batman The Dark Knight, Batman v Superman or Man of Steel, there is really plenty to do. As for MCU fans, they will rather find their happiness on Disney+ where the majority of Marvel movies are available.