Since 2008, Apple has created an inextricable link between its iPhone and its App Store which has imposed itself on consumers and therefore on developers as the essential platform. But today, the Californian giant will have to defend this model and prove that it is not in a monopoly situation following the legal action brought by Epic Games, the creator of Fortnite, which accuses it of abuse to be able to.

The trial that begins today in a California court hinges on a seemingly benign issue regarding payment processing and commissions. In summary, Apple requires app developers to use its payment processing system when selling digital goods in their app like, say, a new skin for a Fortnite character or a dance move to perform after a victory.

Apple considers the use of its payment processing system to ensure safety and fairness, and that the 30% commission it receives on these transactions contributes in part to the operation of its App Store. Epic believes that Apple’s policies are monopolistic and that its commissions are too high.

Repercussions for the entire industry

The outcome of this case could upset the functioning of the App Store and more generally of all other similar platforms, in particular Google Play. It could also prompt governments and legislators to conduct antitrust investigations.

« This is the frontier of antitrust law », Analyzes David Olson, associate professor who teaches antitrust law at the law school of Boston College in the United States.

What makes this case unusual, he says, is that it attempts to challenge the way modern tech companies operate. Apple touts its closed model, which imposes strict control on each application validated for the App Store, as a contract of trust towards the users of its products.

In addition to taking a commission of up to 30% on in-app purchases, Apple requires developers to adhere to a number of restrictions against what it considers objectionable content, such as pornography, incitement to drug use or realistic portrayal of death and violence. Apple also scans submitted applications for security issues and spam.

« Apple’s requirement that every iOS app undergo a rigorous, human-assisted review, with reviewers representing 81 languages ​​sifting an average of 100,000 submissions per week, is critical to its ability to maintain the App Store as a safe and reliable platform for consumers to discover and download software “, Estimates the firm with the apple.

For its part, Epic Games argues that Apple’s tight control over its App Store is anti-competitive and that the court should force the company to allow other app stores and third-party payments on its phones. ” Apple is bigger, more powerful, more entrenched and more pernicious than the monopolies of yesteryear “Said the editor of Fortnite in its complaint filed in August. ” Apple’s size and reach far exceeds that of any tech monopoly in history. “Last February, Epic filed a
complaint against Apple after European Union competition services. He accuses the iPhone maker of having “ completely squeezed out the competition in app distribution and payment processes »By a series of anti-competitive measures.

Epic is not the only one to argue on this point. Two years ago, the music streaming service Spotify seized regulators in the European Union, claiming that Apple’s 30% commission and App Store rules violated European competition laws. Following its investigation, the European Commission has
accused Apple « abuse of dominant position “, Considering that the company has”
distorted competition In the online music market. Apple may present its defense before a final judgment is rendered on this case. The EU could decide to fine it up to 10% of its annual turnover and force it to change the way royalties are applied to streaming services, at least in the European Union . And if Apple were to lose its lawsuit with Epic, it might have to change the way apps are distributed and monetized on their iPhones and iPads.

According to legal experts and people working behind the scenes of the lawsuit, the most difficult argument Epic will have to make will be to prove that iPhone users have been wronged by Apple’s policies.

Epic, and others, claim that Apple’s requirement that developers use its payment processing is itself a monopoly. To which Apple responds that its commission is fair and that the payment processing structure is therefore not unreasonable. Apple has maintained its 30% commission since the App Store launched in 2008 and says industry practices before that date made app developers pay much more.

Epic Games is not at its first attempt with Apple and has already to its credit several successes to push the industry to change. In 2017, the publisher briefly allowed Fortnite players on PlayStation and Xbox to compete against each other. This was a feature that Sony had resisted with other popular games, like Rocket League and Minecraft. So when Epic removed the feature, gamers blamed Sony and launched a social media campaign against the Japanese giant, which gave in a year later.

In 2018, Epic opened its Epic Games Store for PC, a competitor to the industry-leading Valve’s Steam store. Its main feature was to charge developers a 12% commission on game sales, well below the current 30%. Epic has also paid for the highly anticipated game exclusivity rights, forcing players to use its store to check out titles like Borderlands 3, Metro: Exodus from Deep or Shenmu 3. A move little appreciated by gamers, unhappy with having to install a other app store to get access to some of their games. Still, a survey conducted among developers revealed that a majority of them doubted that Valve’s 30% commission was justified. 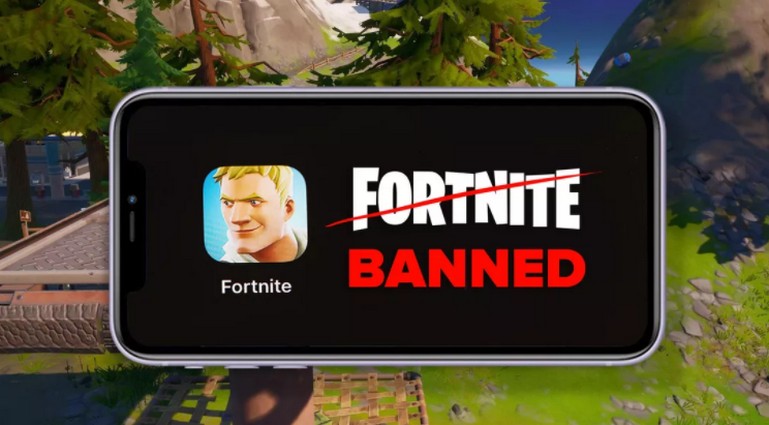 In 2019, Epic decided to engage in a showdown with Apple by choosing to run its own app store and payment processing on the iPhone. Code name of this initiative kept secret until the last moment: Project Liberty.

To make its case, Epic planned to lower the price of “V-Bucks,” the Fortnite in-game currency that players used to purchase new skins for their characters and weapons. On August 13, 2019, Epic boss Tim Sweeney sent an email informing Apple that it would no longer abide by payment processing rules, and activated a hidden code allowing users to purchase V-Bucks directly from from Epic with a 20% discount. Epic did the same with Google which, like
Apple, see you quickly
banni Fortnite from its app store. The publisher of the game then filed a complaint against the two giants.

Whatever the decision, it is very likely that it will be appealed. In the meantime, regulators, lawmakers as well as competitors will be watching closely to what extent Apple and Epic’s arguments could shape new approaches to antitrust.

With such a stake, the two protagonists could consider an amicable settlement before a judgment is rendered. But observers familiar with the matter are skeptical of this possibility, in part because there is very little point of convergence between the two companies.

Apple may decide to lower its payment processing fees, which it has already done for subscription services and developers with annual revenue of less than $ 1 million.

Authorizing another payment processing service on iPhone could be a first dent in Apple’s argument that its tough App Store policies are designed to protect and trust its users . If app developers can use any third party payment they want, why can’t they use different App Stores as well?

Epic has also argued that price isn’t the only issue it’s focusing on. The publisher also wants to choose the technologies he uses in Fortnite.

It is for all these reasons that observers expect the case to continue. Apple and Epic are two big companies with deep and notoriously stubborn pockets.


Article from CNET.com adapted by CNETFrance